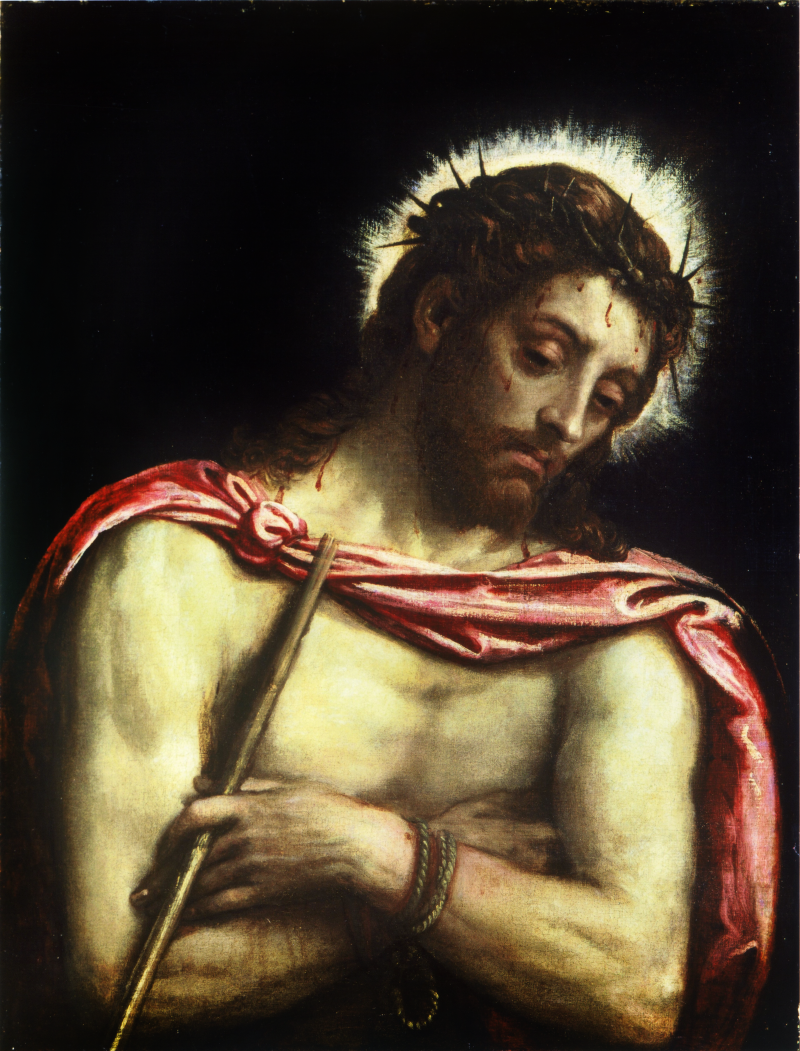 This remarkable image of Christ wearing the crown of thorns and holding a stick in his left hand, derisively given him by his tormentors to mock him as “King of the Jews”, has been known in scholarly literature since 1991, when the present writer published it in a small monograph on Paolo Veronese written with Terisio Pignatti for the Tuscan publisher Cantini (Florence).

Four years later I presented it once again in the catalogue raisonné of the artist’s work published by Electa, with the renewed collaboration of Pignatti (1995).

Until then I had not had a chance to examine the canvas at first hand, although it had been seen by Pignatti during the 1980s when it still belonged to David Carritt in London; the opportunity finally came a few years later when it passed to its current owner. On this occasion I can only reassert my prior judgement, confirming beyond any doubt that its extremely high quality coincides perfectly with what Veronese was painting during the early 1580s. The painting was exhibited in 2000 in New York, eliciting unanimous agreement.

Supporting this secure attribution of our painting toos.” Paolo are numerous and convincing parallels in pictorial language, colour and composition, all found within the painter’s late period and all firmly established within his oeuvre by scholarship. As regards the head of Christ, one need only compare it with that of the Dead Christ with the Virgin and an Angel, completed by 1582 for the church of Santi Giovanni e Paolo in Venice and now in the Hermitage, Saint Petersburg; or with the similar figure painted at this time for an altarpiece in one of the side chapels of the Venetian church of San Zulian; or again, as regards a convincing resemblance of painterly handling and colour, with the Dead Christ supported by Nicodemus and an Angel, on loan to the Tel Aviv Museum of Art, datable to the same period as the two canvases just mentioned.

Likewise, we may make comparisons with slightly later pictures such as the Agony in the Garden, painted by 1584 for the church of Santa Maria Maggiore and now in the Brera Gallery, Milan; and the two versions of the Dead Christ Supported by Angels in the Gemäldegalerie, Berlin and the Museum of Fine Arts, Houston, both painted around 1585. Each of these last two works displays an identical way of describing the red cloak, veined with light created from highlights of white lead pigment brushed along the ridges of the drapery folds (for the
works cited here, see F. Pedrocco, T. Pignatti, Veronese, Milan 1995, vol. II, pp. 404-406, 480, 486-488).

These parallels – together with its own superlative pictorial qualities – all go to prove that this Christ Crowned with Thorns was executed by Paolo Veronese between 1582 and 1585.
For a full understanding and appreciation of this picture, however, we should recall that the early 1580s saw Venice embracing a singular mood of culture and religion derived from the Council of Trent, which marked the end of the Renaissance. Conditions changed for Veronese, among others, with the adoption of a new canon of painting that emerged from the dictates of the
council’s last session, and the reaction to military and political defeats in the war against the Turks, as well as to a series of tragic plagues – events that were experienced within the religious community and the civic world around it as divine punishment for Venice’s excessively liberal conduct. Thus even the joyous decorative rhetoric and splendid sense of colour that had until then been the main reason for the artist’s enormous success were no longer appreciated by his patrons, who now preferred exclusively religious subjects, treated with absolute severity, expressive composure and strict adherence to sacred texts.

Clearly the climate was ripe for Christological subjects, and Veronese treated them on a number of occasions, ultimately becoming the most sensitive creator of this kind of composition among his Venetian contemporaries, conveying it with profoundly lyrical pathos.