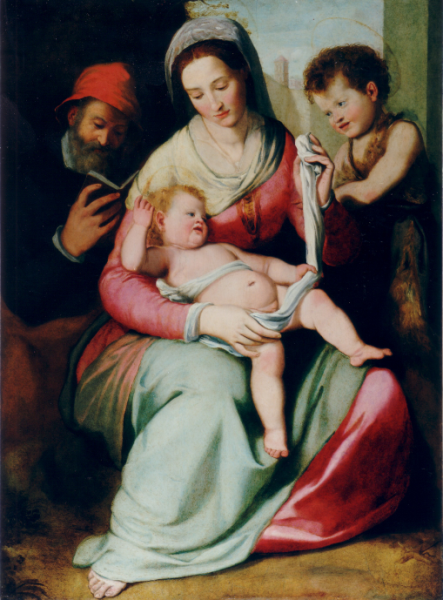 Description
TheVirgin and Child are the focus of this composition, with subsidiary and contrasting figures of theelderly Saint Joseph and the young Saint John the Baptist to left and right, respectively. The formeris shown wearing a bright red hat and immersed in reading a book, evoking what devout viewersmight do as they contemplated this very image; the young Baptist is recognizable by his camel-skinshirt and small reed cross which lies in the lower right corner of the picture. The prominent figure ofthe Madonna,the outdoor setting and the large structure on the right directly evoke a celebratedlost work by Andrea del Sarto, the Borgo Pinti tabernacle (see David Franklin, Painting in RenaissanceFlorence, 1500-1550, New Haven, 2001, p. 151). The suburban settingperhaps suggests that theVirgin is presented here as protector of the city; the bell-tower of a church–the concretevisualization of one of the Virgin’s roles, Ecclesia–is visible in the far background. Sarto’s painting ofthe 1520s is also echoed inthe pose of the Madonna, her right foot emerging at lower left, althoughSanti has cast her gaze lower, in a maternal but melancholy gesture, while she plays with the end ofthe Child’s swaddling-clothes, a symbol of his future shroud. The Baptist’s active pose is alsoSartesque.Santi di Tito, as we know from his biographers Giorgio Vasari (1568) and Filippo Baldinucci (1688),was a painter of Madonnas for the home as well as for ecclesiastical settings, and he based hiscompositions on a prolific seriesof drawings. Two such sheets in the Uffizi Gallery, Florence (7716 F.and 7711 F. verso) attest to his exploration of poses and could be relevant for the present painting,showing variations of the sprawled pose of our painted Christ Child, as well as a preliminary idea (inthe second drawing) for the standing Baptist: see Simona Lecchini Giovannoni and Marco Collareta,Disegni di Santi di Tito (1536-1603), exh. cat., Florence, Gabinetto Disegni e Stampe degli Uffizi, 1985,p. 64, no. 44, pp. 68-69, no. 54, and figs. 53, 64.The work is one from Santi di Tito’s maturity, although difficult to date because his conservative styleis stylistically homogeneous. Such a painting would certainly have provided its original owner withthe visual equivalent of a meditation on the life of the Virgin and Child, and on the consolation to befound in their example, tinged with both joy and sorrow.