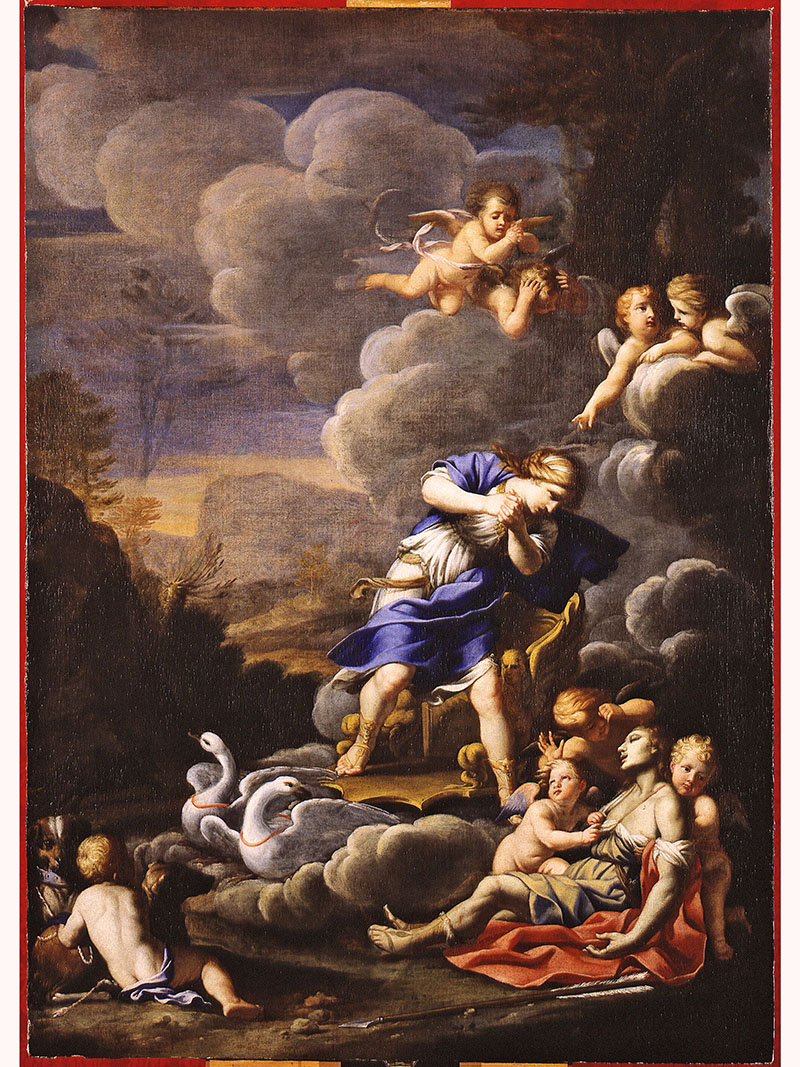 Description
This painting is a depiction of the mythologicalepisode narrated by Ovid in his Metamorphoses (X:705-739) in which Venus laments her beloved but now lifeless Adonis. The handsome youth Adonishad ignored the goddess’ warnings and gone out to hunt, wounding a boar with a javelin, andreceiving a mortalwound from the enraged wild beast. Hearing the moans of her loved one, Venusruns to him but is helpless in the face of death.The canvas illustrates the moment in which the goddess has just sensed the depth of the tragedy andfalls into despair; her sorrow is also expressed by a group of assisting cherubs.Notwithstanding the episode’s essentially dramatic content, the painter does not fail to includevarious elements that relate to the fable in general, with details such as the Adonis’ hunting dogs intheleft foreground, guarded by Cupid, and Venus’ golden throne and pair of swans.Stylistic analysis reveals the author of this unpublished canvas as the Sienese painter Raffaello Vanni,and a probable date in the early 1640s, when the artist was closest tothe classicising taste of GiovanFrancesco Romanelli.The graceful faces of the putti–some of whom, like the one on the cloud at upper right, derive fromGuido Reni–and the sparkling colours, especially in the range of blues (Venus’ robe is an outstandingexample) but also in the reds and ochres, recur in similar passages in works dated by scholars to theearly 1640s.This canvas closely resembles the two altarpieces of the Birth of the Virgin and Saint Helen with theTrue Cross Vanni painted for the Santacroce family in the church of Santa Maria in Publicolis, Rome,which are documented to 1644. Compare, for example, the faces of Venus and Helen, who share thesame sharp profile, and the grimace of pain, as well as the poses of the soft, shapely angels.