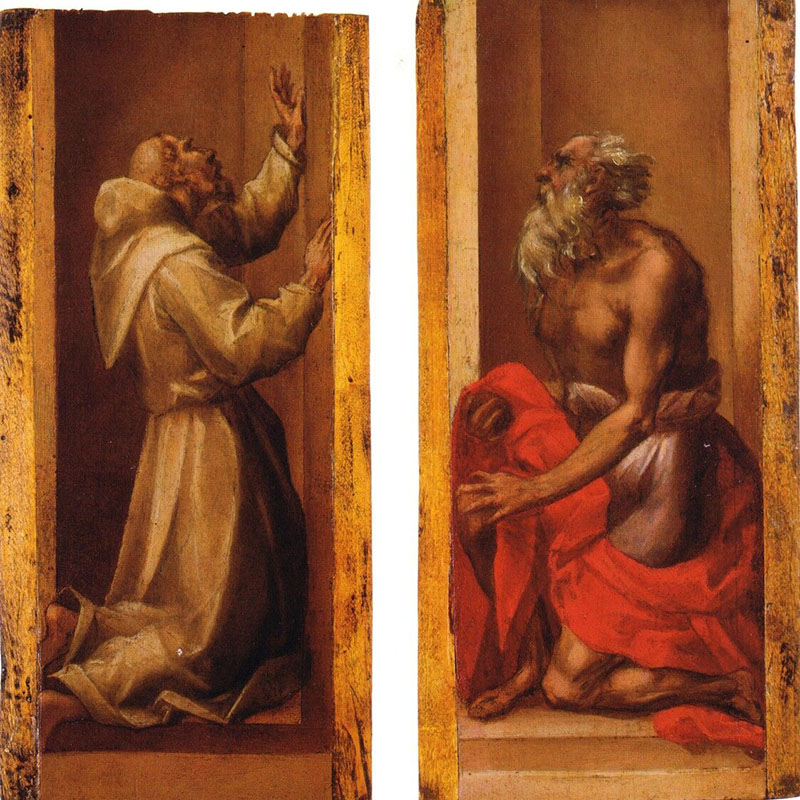 Details
Oil on panel 28.5×12 cm (each) Seen and approved by: Janet Cox-Rearick

Description
Dr. PhilippeCostamagna, in publishing these small panels in 1994, associated them with the Puccialtarpiece, painted by the artist in 1517/1518 (and dated 1518), for the church of San MicheleVisdomini. Even though the altarpiece was long coveted by the rich and powerful (the ArchduchessMaria Magdalena of Austria, wife of Cosimo II de’ Medici and mother of Ferdinando II, offered 1000scudi for it), it has always remained in the church. The suggestion that they might be part of thepredella has engaged some minds: theoriginal design of the Pucci Chapel has not survived, and itcould well have had such a feature. Prof. Janet Cox-Rearick in her review of the Costamagnamonograph (The Burlington Magazine, 139, no. 1127, february 1997, p. 127) doubts the idea thatthese could be part of the predella, partly because of the absence of St. Jerome in the main altarpiece.Costamagna (oral communication, 2009) reaffirmed his belief that these two panels are by the artist,and links them to the great range of artistic innovation that is associated with the Pucci altarpiece,and the National Gallery Stories of Joseph.These panels also echo in style the panels painted for the Chariot of the Mint in the Palazzo Vecchio,whilst the nature of the modeling of the hands show Pontormo’s distinctive hesitancy, seen in manyof his drawings at this time such as the Study of John the Evangelist, Uffizi, Florence.The kneeling poses are linked with Pontormo’s drawings in the Uffizi (Inv. No. 6744F recto) and theJ. Paul Getty Museum, Los Angeles (Inv. No. 83GG379) that Costamagna illustrates on the followingpages to the two predella panels, and reflect the artist’s attention to anatomy at this period. It is saidthat he and Rosso undertook anatomical dissections around this time, and the Puccialtarpiece wasclearly a commission that represented in many ways a summation of all the innovations that the artisthad participated in.The pose of the St. Francis in the altarpiece is in reverse to the Getty and Uffizi drawings, which areof a kneelingfigure looking left; but reversing a design was often employed, and the many figurestudies show how Pontormo, at this period, was engaged in the description of small figures in a largercontext. The most important instance of this is, of course, in the panels of Stories of Josephcommissioned in 1515 on the occasion of the wedding of Pierfrancesco Borgherini and MargheritaAcciauoli by Pontormo (notably the four panels now in the National Gallery), Del Sarto, Granacci andBacchiacca. The format of the commission, for the decoration of the nuptial bedroom, andparticularly the bed itself, was what dictated the employment of small figures.