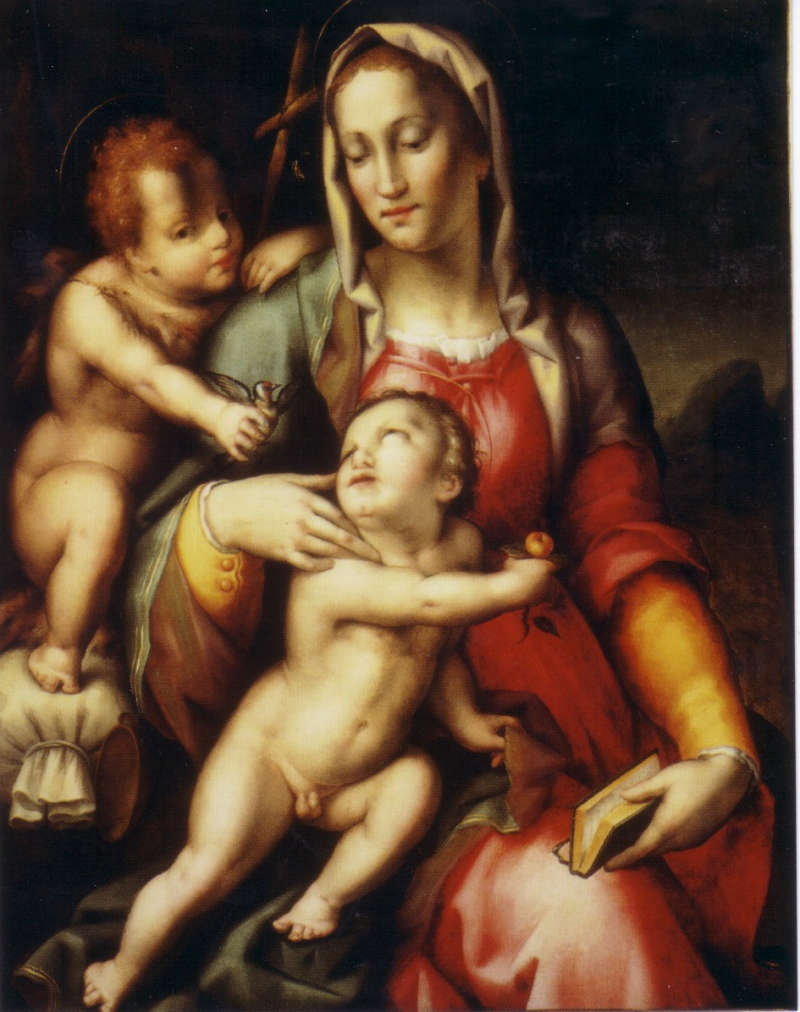 Madonna and Child with Saint John the Baptist

Literature
«From Light to Enlightenment»: Italian old master paintings from 16th to 18th centuries, Exhibitioncatalogue, Shanghai Art Museum, China, 12-17 November 2005, p.This Holy Family was made for a private patron in Florence during a period when it was notuncommon for sacred pictures to be commissioned for domestic use, thus bringing religion into thehome. Our painting also displays the work of an artist who reflected the latest styles in design andcolour–most specifically Andrea del Sarto and Pontormo, the latter’s brilliant tonalities derived inturn from Michelangelo’s Sistine Chapel ceiling. The intense, glowing oranges and reds would havebeen admired as much as the presentation of the group of figures set against a landscapebackground, which suggests that the subject could have been understood as a Rest on the Flight intoEgypt. This was a popular theme involving the Holy Family, and in this case the customary figure ofJoseph is replaced by the young Baptist, who has one foot on a sack used for travelling. The propheticprecursor of Christ is depicted in the act of offering Jesus a goldfinch, a symbol of the Passion. Jesusseems to turn away from the fluttering bird and holds a small apple, symbolic of the Fall of Mankind,which was intended to make one remember that humanity will be redeemed by His presence. TheMadonna holds a prayer book in herleft hand, and symbolizes the Church itself; her majestic figureoccupies most of the picture space.The style of this painting most closely reflects the work of Andrea del Sarto, and can probably bedated to the 1530s, when Foschi would have had the clearest memories not only of the Bracci HolyFamily, mentioned above, but of similar panels such as the so-called Medici Holy Family (Florence,Palazzo Pitti), painted in the late 1520s. The straightforward presentation of the religious themewould have evoked an equally direct response from its viewers.