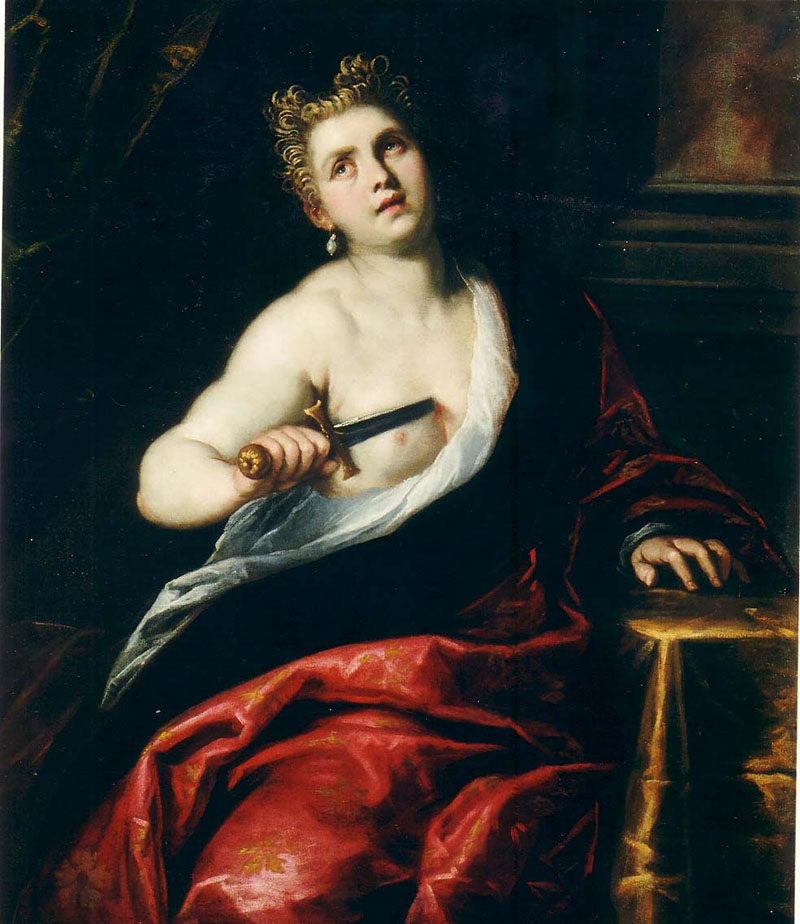 The Death of Lucretia

Description
The subject of this painting, Lucretia (died c.508 BC), is asemi-legendary figure in the history of theRoman Republic. According to the story, told mainly by the Roman historian Livy and the Greekhistorian Dionysius of Halicarnassus (who lived in Rome at the time of the Emperor Augustus), herrape by Tarquinius Superbus (Tarquin the Proud), the king’s son, and her her consequent suicide werethe immediate cause of the revolution that overthrew the monarchy and established the RomanRepublic. Palma’s dramatic presentation shows the heroine in the moment after her violation: hereyes still red from weeping and her dress dishevelled, she is nonetheless steadfast in her purpose asshe plunges a dagger into her breast. Lucretia is a married woman, but in killing herself–“deathbefore dishonour”–she frees her husbandfrom the responsibility of vengeance. The shame broughton her family is thus wiped away, and she becomes–albeit posthumously–an emblem of fidelity,civic duty and patriotism. The message was an ever-relevant one in the period around 1600 as therewasa taste for themes involving moral superiority, and this could be conveyed through Biblicalsubjects or episodes from ancient history, as in the picture before us. The rich chromatic qualities ofthis canvas evoke the grand Venetian tradition of Paolo Veronese and Bassano, and the appearanceof the Roman lady, in particular her golden curls, finds a parallel in the figure of Venus by Palma–probably also painted during the first decade of the seventeenth century–in the Pardo collection,Paris.