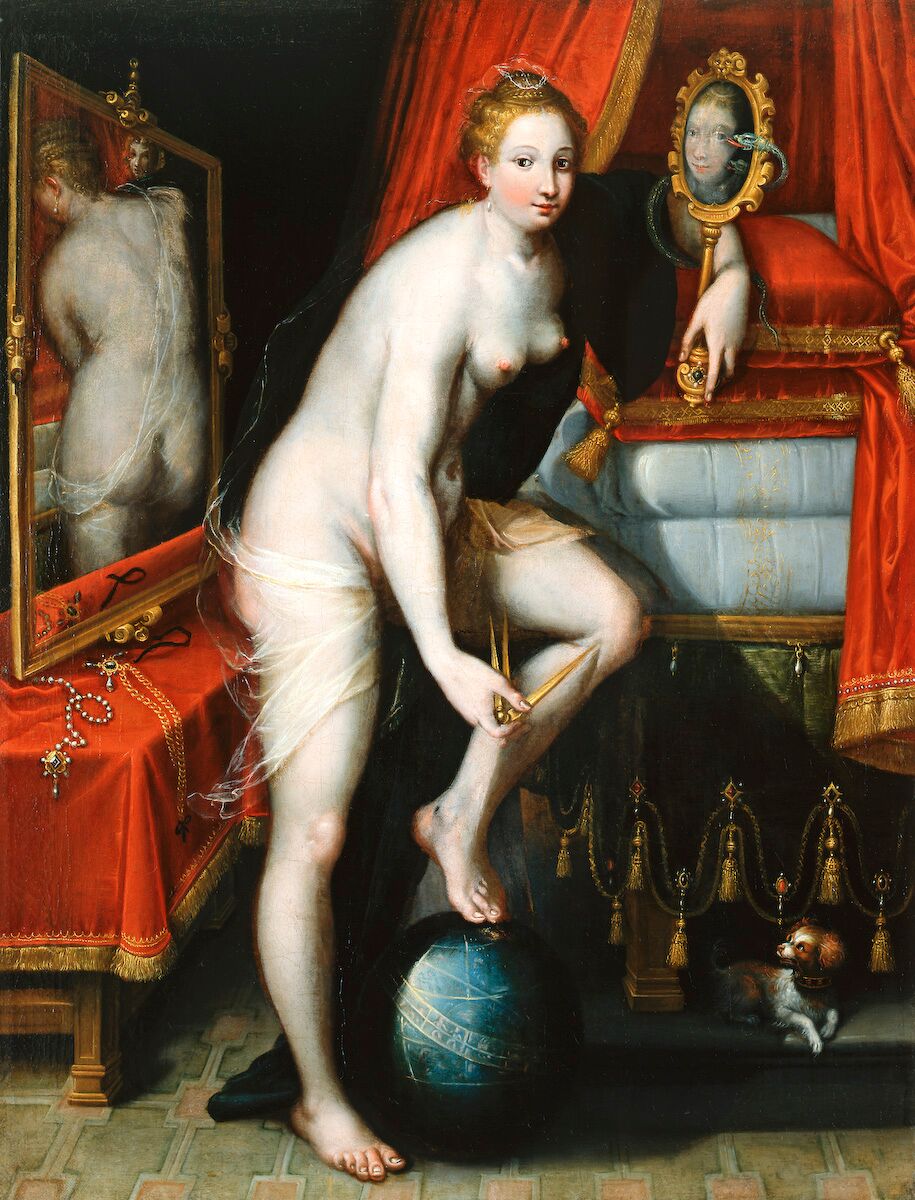 The authorship and subject of this painting – examined at first hand by the present writer –have been the object of intense discussion between Michele Danieli, Angela Ghirardi, Vera Fortunati and myself, and there is total agreement on its excellent quality and great interest, as well as on its generally very good condition.

Our unanimous opinion is that it was painted by Lavinia Fontana, one of the rare women painters active in Italy during the second half of the sixteenth century and early years of the seventeenth.
The attribution to Lavinia is based above all on stylistic components: the quality and material consistence of the veils and materials, a calculated taste for carefully-considered forms, balanced by painstaking attention to decorative elements, and the inclusion of typical elements from her repertoire, such as the little dog at lower right.

Meanwhile the idea behind the composition and subject – here enriched with meaning, evidently through a request from the patron – derive from examples treated earlier on by Lorenzo Sabatini (Bologna, circa 1530 – Rome, 1576), the official painter of Pope Gregory XIII, and by his Flemish pupil Denys Calvaert (Antwerp, circa 1540 – Bologna, 1619), who was already active in the Emilian capital in the 1560s.

In particular, there exist two steps that lead us to the beautiful picture here assigned to Lavinia: the so-called Allegory of Geometry or Symmetry in the Galleria Sabauda, Turin, a sizeable canvas of 167 x 140 cm, formerly attributed to Francesco Salviati and correctly given by Jürgen Winkelmann (“Lorenzo Sabatini detto Lorenzino da Bologna”, in V. Fortunati Pietrantonio, ed., Pittura bolognese del ’500, Bologna 1986, II, p. 601) to Sabatini, with a dating to the mid-1560s; and a drawing by Calvaert, iconographically closer to our painting, and now in the Museum of Fine Arts in Budapest (inv. no. K.66.25), finely catalogued by Andrea Czére (Disegni di artisti bolognesi nel Museo delle Belle Arti di Budapest, exh. cat., Bologna 1989, pp. 18-19, no. 5, illus.) with the title La Simmetria and a slightly later dating.

It should be said, however, that Winkelmann also knew a “probably autograph” replica of the Turin canvas with “nearly identical dimensions” that was on the art market in Milan in 1975; and that Czére refers to the 1797 catalogue of the Praun collection by Christoph Gottlieb von Murr (Description du Cabinet de Monsieur Paul de Praun a Nuremberg, Nürnberg 1797), who lists a picture of small dimensions by Calvaert entitled Simmetria and describes the sheet in Budapest as a preparatory study for this work.

Furthermore, Czére adds that both the painting and drawing by the Flemish painter presumably passed “together and directly from the artist to Praun, who lived in Bologna between 1600 and 1616 and formed a friendship with Calvaert” (on the drawing and painting by Calvaert in the Praun collection, see also K. Achilles-Syndram, Kunst des Sammelns. Das Praunsche Kabinett. Meisterwerke von Dürer bis Carracci, Nürnberg 1994, p. 238). Finally, we should be aware – as Angela Ghirardi kindly informs me – that Paulus Praun was also a patron of Lavinia Fontana.

While all trace has been lost of Calvaert’s painting, it appears very likely – as we can infer from the drawing in Budapest – that Lavinia’s initial source for the canvas presented here was that very work. Indeed, under the surface of her style, at once more firmly defined and containing delightful artifice, the mark made by the Flemish artist remains practically intact.

If this is the case then our painting should be dated to about 1590. It was at this point – with Bologna now widely embracing the naturalism of the Carracci – that Calvaert had become an entirely established painter. He firmly believed in the tenets of those who, like Lavinia, still cultivated a late Mannerist style that quite frankly addressed itself to a taste that was aristocratic, sophisticated, and international. This is how we should read not only the subtly artificial play of the images reflected in the mirrors, but also the wealth of symbolic elements – the globe, the compass (and a pentiment that also involves the hand) the dog, the jewels and the mirrors themselves, especially the one with a snake coiling itself around it, held by the almost entirely nude female figure.

It is this superabundance of symbolism that makes it challenging to assign a precise title to the painting, although it could perhaps be read as an “Allegory of Prudence” (mirror and snake) determining the measure of amorous pursuit. The personification of Venus – goddess of love who governs the world (hence the globe) and female beauty incarnate – is shown measuring the distance, or seeking a middle point and balanced proportion, between the sensual vanity of earthly pleasures (the rectangular mirror and jewellery, to which she turns her back) and fidelity to the conjugal bed, represented by the little dog who watches her.