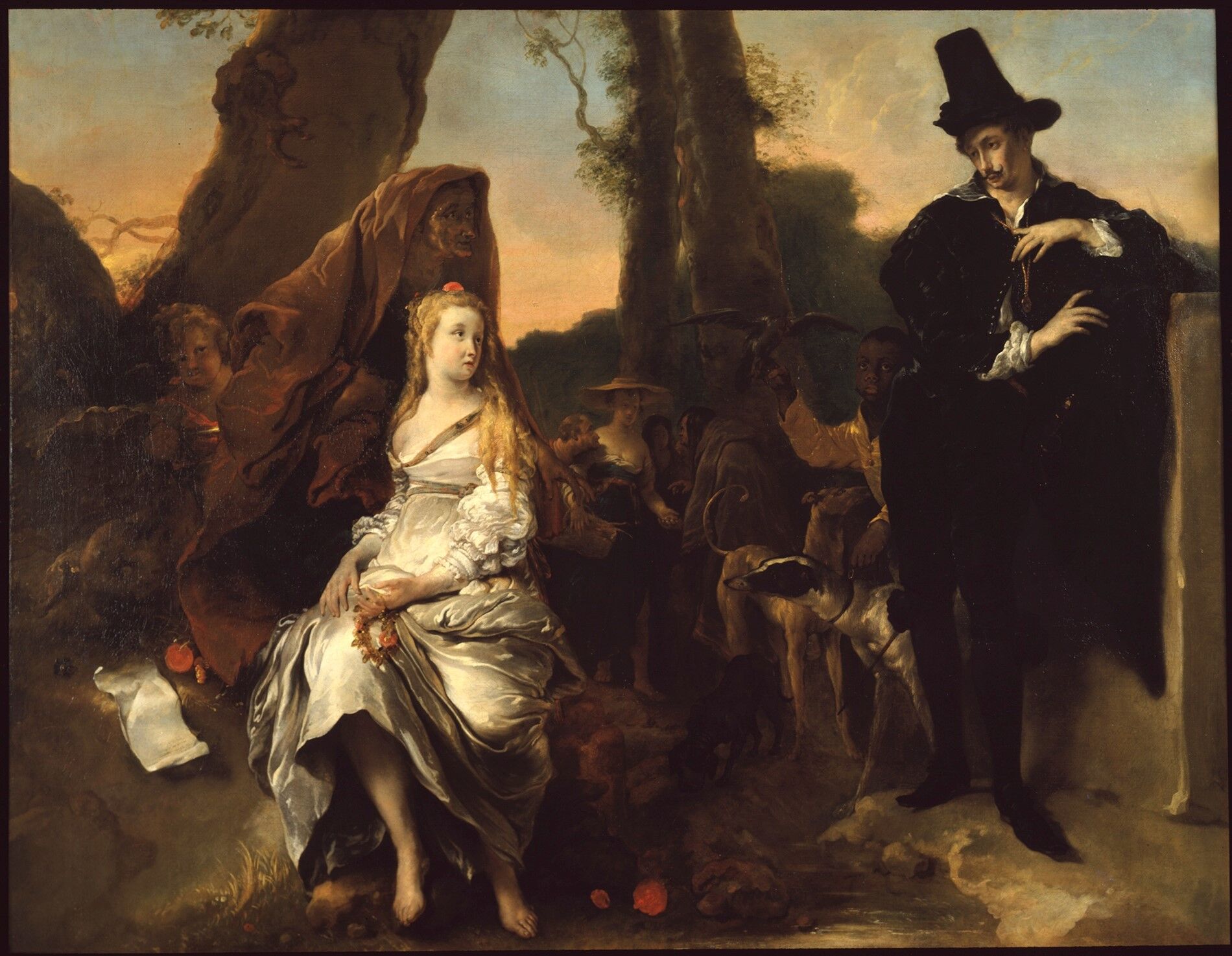 Copies
1) Canvas, 117 x 188 cm, sale S. Eckman Jr. and others (anonymous section), London (Sotheby’s), 18October 1967, lot 11 (as A Hunting Party Resting, by J. van Noort: “with a woman in elegant dress, anattendant and a negro holding a hawk and dogs in middle distance, four figures conversing in thebackground; in a rocky setting with trees”) 2) Canvas, 128 x 179 cm, sale, London (Sotheby’s), 15December 1976, no. 17 (as Vertumnus and Pomona, by Jan van Noordt: Pomona, in blue seated inthe left foreground, Vertumnus disguised as an old woman covered by a brown shawl behind, a youngman in balck with a black hat to the right, dogs and a servant with a falcon behind)

Literature
A. Staring, Weinig bekende portettisten. III. Joannes Van Noordt, Oud Holland, 61, 1946, p. 74; Cats1966; S.J. Gudlaugsson, 1975, p. 29, ill. no. 25, 33; Benezit 1976, p. 750; W. Sumowski, Gemälde derRembrandt–Schüler, 1983-1996, vol. 1, p. 142, note 64; vol. VI, pp. 3534-3535, note 88, ill. p. 3576;P. Schatborn, Tekeningen van Jan van Noordt, Bulletin van het Rijksmuseum, 27, 1979, pp. 119-120,ill. no. 3; I. Gaskell, Transformations of Cervantes “La Gitanilla” in Dutch Art, Journal of the Warburgand Courtauld Institutes, 45, 1982, pp. 263, 267, ill. 46A; P. van den Brink in exh. cat., Utrecht 1993,pp. 22, 235 and 238, note 1 (conflates the present picture and the second copy, given below); W.Sumowski, 1998, p. 79, note 15; D. de Witt in Van Noordt: Painter of History and Portraits in Ams,McGill Queens Univ Pr., 2007, pp. 146–149, illus. p. 147.
To the right stands a man leaning against a large rock. He turns to the left, and looks across toa youngwoman in a satin gown, seated on a mound near the centre, who returns his gaze. Behind her is anold hag, draped in a rough cloak with a hood. Further back are some more figures, including a youngblack man holding a falcon. Previously, it had been identified as a genre-like “Cavalier et une JeuneFemme,” or the classical story of Vertumnus and Pomona. Gudlaugsson pointed out the connectionto Jacob Cats’ Het Spaense Heydinnetje (The Spanish Gypsy Girl) of 1637, a Dutch adaptation in versepoetry of Cervantes’s La Gitanilla di Madril first published in 1610 (1). More recently it has becomeclear that Van Noordt’s painting follows an adaptation of this story for the stage, published in 1643by Mattheus Gansneb Tengnagel (2). Especially the roses in Pretioze’s hair and hands, and herluxurious white gown, are explicity mentioned by Tengnagel, in his monologue of Don Jan as he spieson the gypsy band, with Pretioze in their midst (3).But heavens, what do I see! This is beyond my understanding!It is agypsy band of men and of women!People strew flowers about! They must be holding a wedding!Or it is a preliminary for a similar feast.And if someone was married, then it was the one,Who in white clothing sits in the middle preening.I wish that she would just look around! There she turns to look!what sparkle […]Because she is dressed splendidly, Don Jan at first mistakes her for the goddess Diana. It is an aspectnot reflected in Cat’s earlier version of the story. Cats’s poem was published with print illustrationsby Adriaen van de Venne, including one of the scene of the first meeting. There, the figure of Pretiozewears rather plain clothing (4).The somewhat affected pose of Don Jan is explained by reference to the play, which indicates thathe is already saddened by the recent loss of his mother, and that he has taken great fright at thevoices of the Gypsy band deep in the forest. He is a little crazed, and first thinks that Pretioze is thegoddess Diana, taken prisoner by a band of devils. It is in this rather helpless state that he is thensmitten with love for her. Van Noordt paid special attention to the figure of Don Jan, devising a limp-wristed gesture to project his emotional state. The artist arrived at this invention in a lavish andcareful preparatory study drawing, in the Amsterdam Rijksprentenkabinet (cat. no. D12).Van Noordt painted this picture around 1660. Its composition does not relate to previous depictionsby other artists, but rather to his own painting of The Triumph of David, likely done a few years earlier.It shows the same approach of placing of important figures at some distance across from each other,in the foreground. Perhaps a theatrical device, to create tension between them, is reflected here.Dr. David de WittBader Curator of European Art