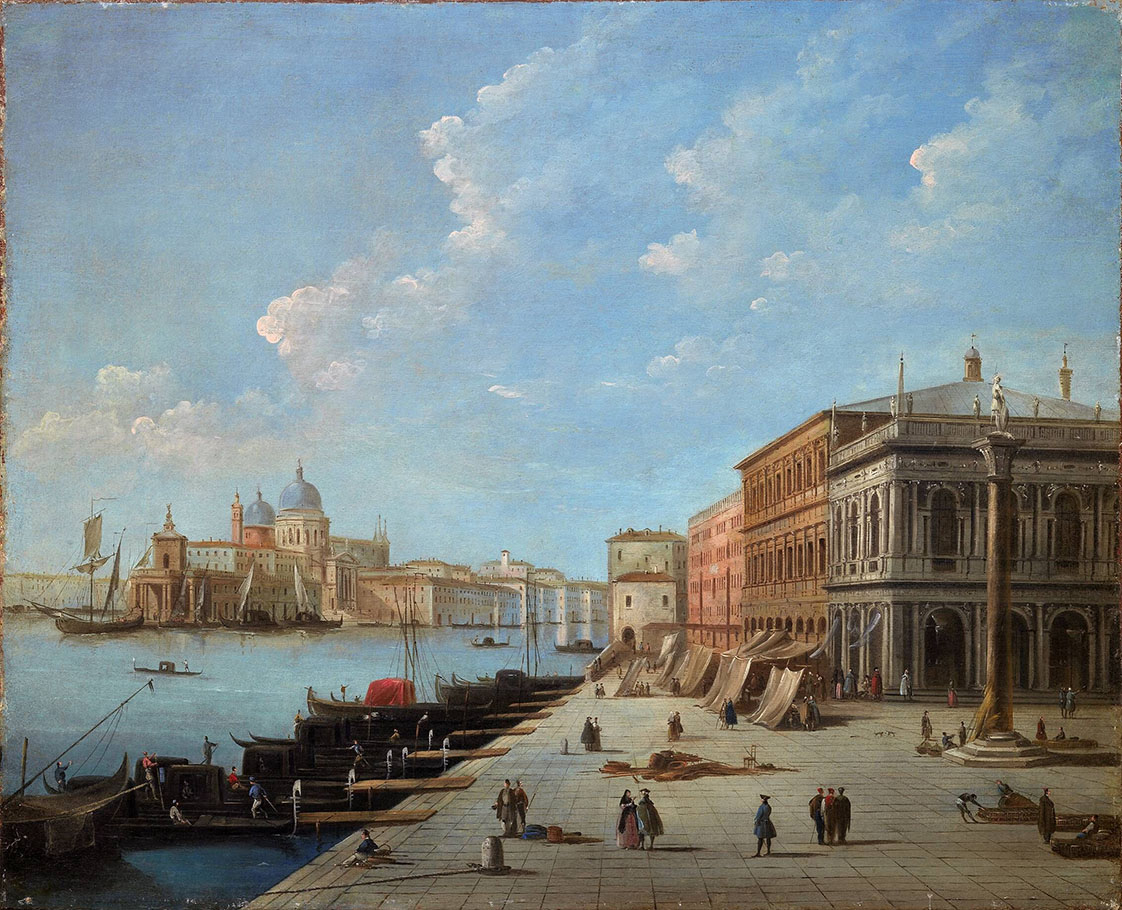 Venice, view of the Molo, looking toward the Zecca with Saint Teodoro column

Description
The view derives from a similar work by Canaletto, part of the celebrated pendant (View of the Mololooking toward riva degli Schiavoni with Saint Mark’s column) once part of the Luigi Albertinicollection then purchased in 1995 by the Comune of Milan for the Museo d’Arte Antica in the SforzaCastle.In the 18th century, the painting alongside its companion, entered into the collection of the Dukes ofLeeds through mediations by the British Consul Joseph Smith, protector and official agent forCanaletto himself. The works enjoyed a fortunate early success thanks to the prints undertaken byAntonio Visentini, which only incurred minor changes from the original works and the aquatints of1742 which completed the second part ofthe collection dedicated to Canaletto’s views, UrbisVenetiarum Prospectus Celebriores (“Prospectus a Columna S. Marci ad Ripam Dalmatorum vulgò deSchiavoni”). Another two variations are know as well, executed by Brustolon in larger scale andinserted inthe Prospectus Aedium Viarumque by Furlanetto in 1763.It is to these printed examples that we can trace the following painted interpretation, which capturesthe lighthearted ambiance of a Venetian day, rendered lively by the dominating crystalline sky, whichcommunicates with the greenish lagoon “touch’ of the Grand Canal. Within is also the reflection of ahistoric city, which comes forth advocating its most celebrated characteristics, utilizing the boats inthe foreground to suggest the flowing of the water and people. Venice is an illustrious city, which inthe repositioning of the delightful moments of everyday life lives its constant transformation, passingfrom history to legend. Clearly confirmed by this captured moment, attributed to GiuseppeBernardino Bison, perhaps the most interesting painter of the transition phase of Venetian figurativeculture between the 18th and 19th centuries, as endeavored to demonstrate in the various studiesreached at the Udine show in 1997 (Giuseppe Bernardino Bison pittore e disegnatore, catalogue ofthe show by G. Bergamini, F. Magni, G. Pavanello, Milan 1997). A native of Palmarola del Friuli, heemerged on the Venetian art scene at a very young age, attaining a worthy degree of success as apainter and interior decorator. However it was his landscapes and city views that would bestow onhim the greatest admiration, so much so in fact, that beginning in 1800 he found great support in thepublic of Trieste, at the time a city inhabited by a wealthy middle class fascinated with collectingcontemporary paintings, practically adopting Bison for his uncommon ability of combining theexquisite stylistic qualities of 18th century “touch” painting to the more modern subjects and stylesof the renewed cultures of the 19th century. With these superb credentials the artist, now elderly, plays his last card by moving to Milan, the capital of the Lombard-Veneto in 1831 where he continuesreceiving accolades as disclosed in the days periodicals.In this painting the original and descriptive vivacity of Giuseppe Bernardino Bison’s figures is easilyrecognizable, put forth by the architectonic scenery of Venice, in which the laws of perspectivecomposition open to the gleaming atmosphere. As expected, such works, as the one here examined,are based on transcriptions of scenes made famous by the best painters of the 18th century. It istherefore not surprising that Bison utilized an engraving to recreate this Venetian scene, a disciplinewhich obliged aspiring artist, as part of the academic education, to practice using the models fromthe best antique paintings. It is consequently understandable that the artist from Palmarola himself,engaged in painting views of Venice, as well as lessons of perspective, could not have withheld fromusing Canaletto, the best 18th century painter as an example.Bison became a 19th century reflection of the master from the seventeen hundreds and thusreplicated the extensive Venetian views, seizing the boundless horizons, depicting them with clarity,giving the necessary attention to the details of the buildings. Executing at times the necessarymodernizations to the buildings in the scene, as well as, simultaneously including the episodes thatanimate this city in which we discern the invention of the “macchiette” (small blotches).His complete command in the layering, which seems to confront a personal interpretation of thedesign as opposed to the “model” of refined Venetian origin, appears to allocate the present paintingto the last years of his Milanese period. As previously disclosed he arrived at the Lombard capital in1831 joining Raffaello Tosoni, an agent who facilitated his sales and who allowed him access to theBrera exhibitions. With sufficient certainty the work here in question can also be placed within thosesensitive works, revisiting the celebrated moments and times of Venetian cityscapes with a sensitivitythat attests to the artist’s production of the 1850’s, from the essence that would have given origin tothe myth of Venice.