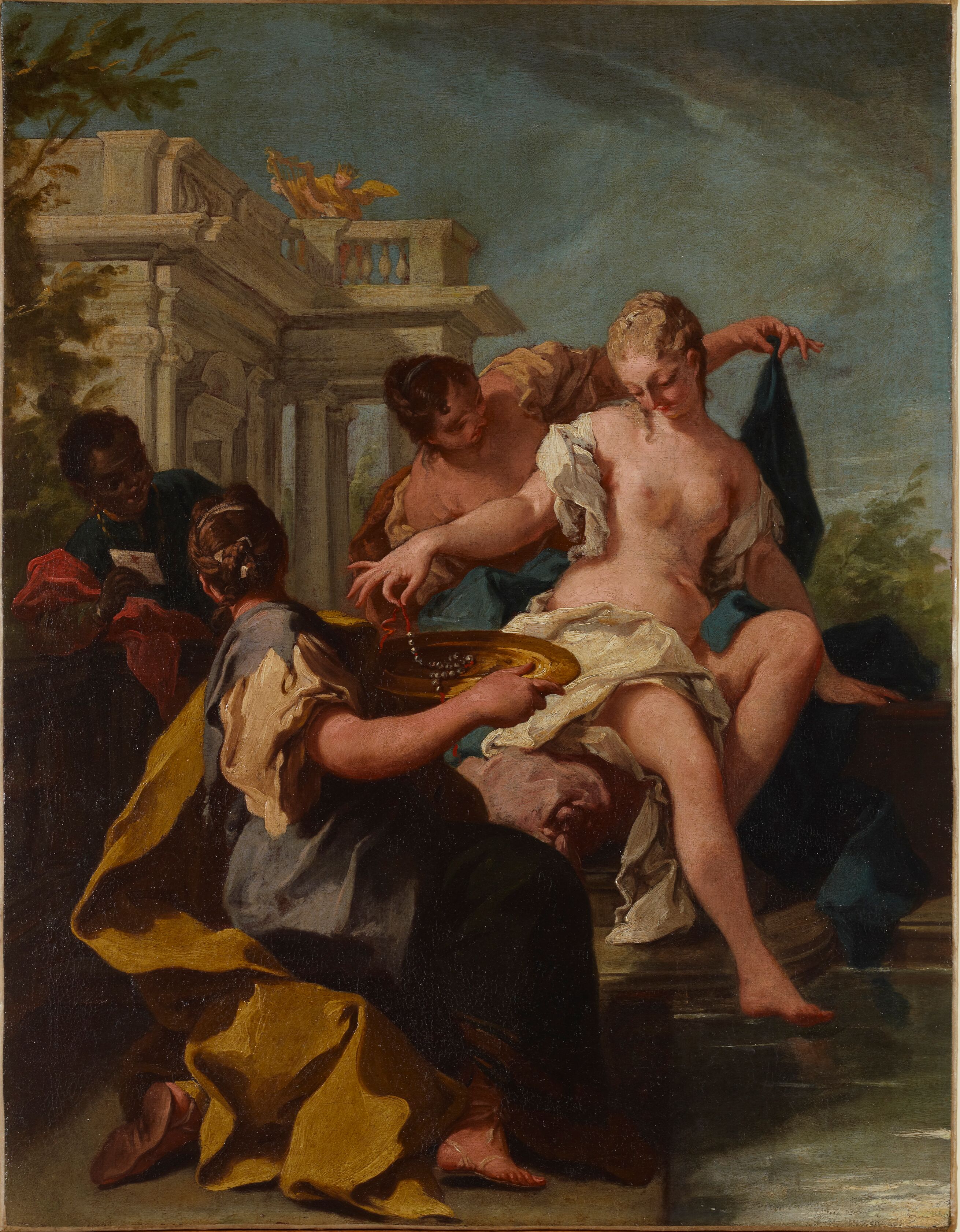 Literature
D. Succi and F. Pedrocco in La Pittura Eloquente, exh. cat., Maison d’Art, Monte-Carlo 2010, n. 23,pp. 123-126, illus. p. 125.Standing on the terrace of his palace, King David has caught the first glimpse of the beautifulBathsheba, wife of his general Uriah. While Bathsheba finishes her bath, accompanied bymaidservants, the king immediately sends a messenger to invite her to the palace, having fallenhopelessly in love. The scene was painted innumerable times by Venetian painters, and of the manyeighteenth-century versions of the subject, Giambattista Pittoni’s stands out not only for its excellentpictorial quality, but also for its precise adherence to the narrative as described in the Bible (Samuel2:11-12). Harp in hand, David appears on theterrace of a palace that recalls the painted architectureof Veronese. As in traditional iconography, he looks down to admire a very young and sensualBathsheba who has just emerged from the water. Behind her a maidservant is about to cover hershoulders with a blue mantle, and she faces another who holds a platter containing the precious pearlnecklace intended for the young bride of Uriah. The woman’s attention is distracted by the arrival ofKing David’s black servant, an extremely elegant figure clothedin blue livery and red mantle andbearing the letter containing Bathsheba’s invitation to the palace.It is interesting that this image corresponds precisely to the description of a work by Pittoni listed inthe catalogue of the Pinelli collection in Venice. The Pinelli picture was assessed by DomenicoMaggiotto and Davide Antonio Fossati and offered for sale in 1785: “Bathsheba bathing, with twofemale servants, one holding a mantle and the other proffering a cassettina [small chest] with pearls.There isalso a moor presenting a letter to her.

Furthermore, the background has David with his harp observing the scene from the royal palace. Apainting of attractive and judicious composition, with a beautiful perspective. On canvas, height P. 2-1, width p. 1 onc. 4 [2 piedi 1 oncia by 1 piede 4 once]”. Although the stated measurements (roughlyequivalent to 69.4 x 35 cm) do not match those of the present picture, especially regarding width,the description accurately matches what is depicted here, except for the cassettina held by one ofthe servants. As Franca Zava Boccazzi (Pittoni, Venice 1979) correctly indicated, this proves thatPittoni produced several paintings of the subject of David and Bathsheba, not solely in horizontalformat (there are two known, one formerly in the Perocco Collection in Milan, the other in a privatecollection in Stockholm), but also in vertical format, and it seems highly probable that this particularpainting is the prototype. It can be securely dated to the early 1720s because of its clear, luminouscolours–unmistakably echoing Veronese–and swift, sinuous brushstrokes that characterize theartist’s paintings of those years. A further confirmation as regards chronology is provided by theresemblance of Bathsheba to the figureof Diana in Pittoni’s celebrated canvas in the Museo Civicoin Vicenza, unanimously dated to circa 1723.Filippo PedroccoThe canvas is also accompanied by a scholarly note by Dr. Dario Succi, who independently believesthat this is the prototype, paintedcirca 1723, from which the replica in the Pinelli collection in Venicewas composed. He intends to publish our picture in a forthcoming study on Venetian eighteenth-century painting.