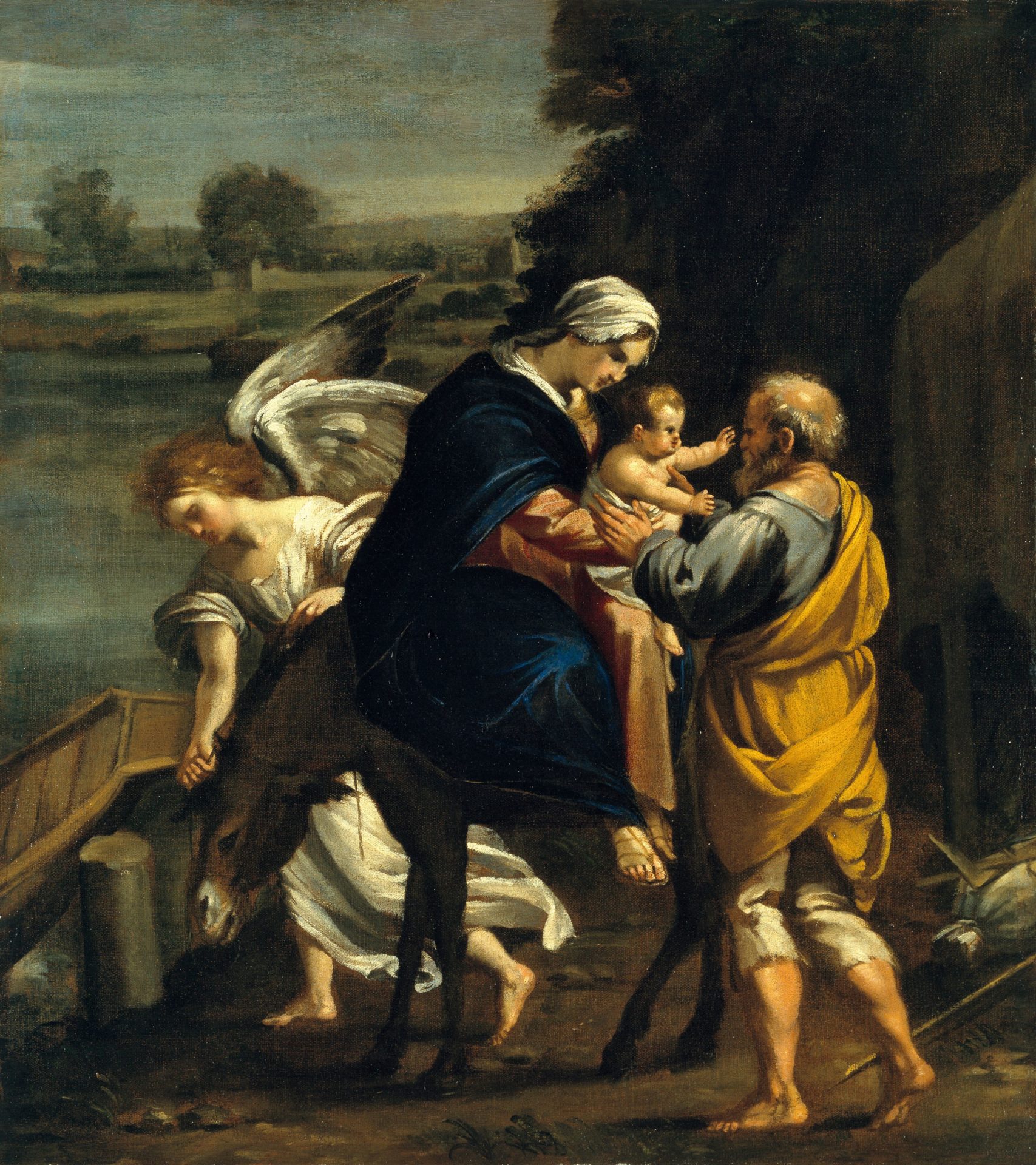 The Flight into Egypt

The Gospel episode briefly described only by the Evangelist Matthew (2: 13-14) was enriched through imaginative fantasy in the Apocryphal Gospels, and in particular in that of the Pseudo Matthew (18-24), with accounts of breaks and diversions during the Holy Family’s adventurous journey. This iconography provided artists with an occasion to transform the sacred episode into an idyllic narrative set in broad and always varied landscapes.

The unusual depiction – a journey by water – originated in Northern European art, and in Emilia became well known through a painting by Ludovico Carracci that took a different approach by narrating the Holy Family’s return journey (Bologna, private collection).

Our Flight recalls even more strongly another painting by Ludovico, “the most graceful Blessed Virgin with the Child and Saint Joseph disembarking in a beautiful landscape, with figures much smaller than nature” described by Carlo Cesare Malvasia (Felsina Pittrice, Bologna 1678, vol. I, p. 354) as owned by the Bonfiglioli in Bologna.

Bononi composes the scene in an unusual vertical format, and the scene hinges on the Holy Family in the foreground, shown as they board the boat. The story is enlivened by the swiftness of the flight itself: Mary is still on the back of the mule and gingerly passes the Child to Joseph, his arms reaching out to the old man who is ready to receive him – their natural, spontaneous gestures mingling with each other in an affectionate embrace. The painter thus conveys the sacred theme with a human, familiar tone.

The angel, absorbed in holding the rope, has red curls – recalling Reni – windblown hair and silvery-feathered wings that stand out against the river landscape, shrouded in Po valley mists. The distant oak trees in the meadows beyond the city walls and the hills on the horizon fade into a tranquil evening sky.

The enamelled colours, folded onto each other in Venetian style, and the fluid brushwork, emphasise the folds of drapery in the simple cloaks, rendered almost like velvet and linen.
The artist’s skill in transforming the sacred narrative into a familiar scene, of translating contrasts of light and shade into painstaking, sensitive modulations of illumination, is very similar to the effects achieved by the early Caravaggesque painters – Orazio Borgianni, Carlo Saraceni and Orazio Gentileschi – who changed the violent chiaroscuro contrasts of Caravaggio into a series of sumptuous chromatic shifts, steeped in a clear atmosphere.

Final proof of Bononi’s full authorship of this canvas appears in the characteristic snub-nosed profile of the Child, a recurrent feature of other mature paintings by him, and subsequent to his Roman journey, after which he freed himself from late Mannerist forms.

The dimensions and uninhibited interpretation of the subject suggest a private commission.
Its excellent state of preservation enables us to appreciate its brilliant painterly handling. This painting is without question the most important of the works recently added to the painter’s oeuvre.