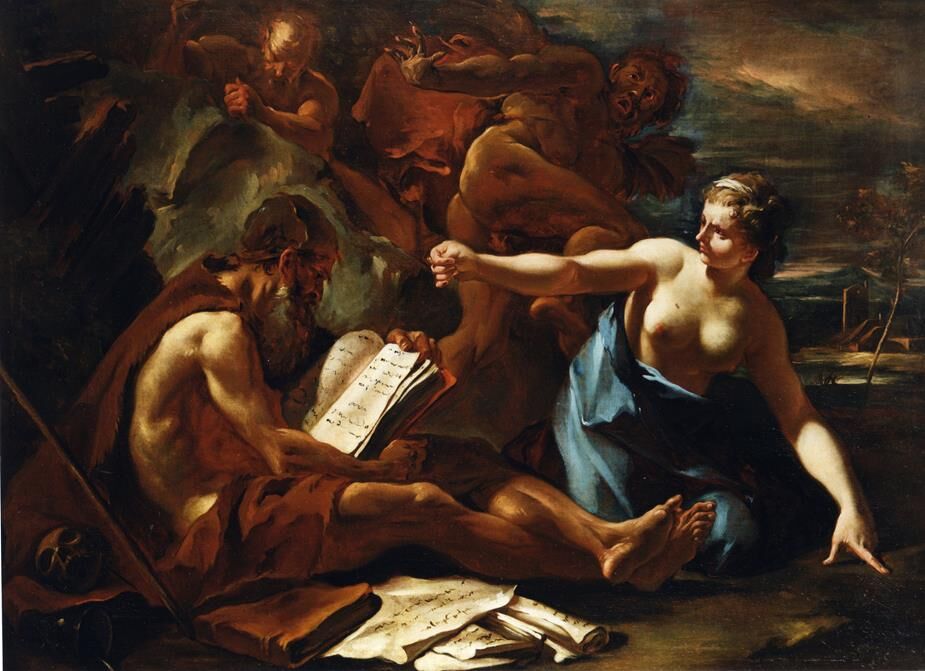 The Temptation of Saint Antony Abbot

Description
What we know of the life of Saint Anthony Abbotcomes from the Vita Antonii compiled by SaintAthanasius in the year 357, and by the numerous references assembled in The Golden Legend byJacopo da Varagine.He was born in circa 251 in Coma, the present-day Qeman, in Egypt. Upon his parents’ death, in hisearly twenties, he gave all his goods to the poor and retired to the desert–like Paul of Thebes andother early Christians–for a life of meditation and penitence. In time he was joined by an increasingnumber of followers, but feeling the need for solitary hermitage he abandoned all those around himand retired to Mount Kolzim near the Red Sea, where he died in 356, aged 105.Like other Christian hermits, Anthony was exposed to a variety of terrible temptations that wereoften to nourish the creativefancy of painters. The saint is generally depicted being threatened bymonsters or evil spirits, or being incited by seductresses to lose his chastity.The subject is often found in the oeuvre of Sebastiano Ricci, especially during his early maturity, and–given the fact that this also fascinated Alessandro Magnasco–it may be among the themes thatRicci adopted from the Genoese painter at the time he was most inspired by him.Sebastiano must have already made Magnasco’s acquaintance when he lived in Milan in the periodaround 1694-1695. While working on the frescoed decoration of the cupola of San Bernardino alleOssa, the altarpiece of the Guardian Angel in the church of the Carmine in Pavia, and the commissionfor the grand canvas in the Cathedral of Monza (The Foundation of the Basilica by QueenTheodolinda), Ricci actively cultivated contact with equally important private patrons in Lombardy;and it is precisely in this area that he shows how partial he was to the work of Magnasco.Unquestionable proof of their common purpose can be seen in the two canvases of The Martyrdomof Saint Erasmus, executed by each artist at the end of the century: the Genoese work now in aprivate collection in Liguria (F. Franchini Guelfi, “La pittura di Alessandro Magnascodalle fontifigurative e culturali alle tenebre della realtà”, in M. Bona Castellotti, ed., Alessandro Magnasco: 1667–1749, exh. cat., Milan 1996, pp. 142-143, no. 18, illus.), and Sebastiano’s in the Brera Gallery, Milan(A. Scarpa, Sebastiano Ricci, Milan 2006, pp. 246-247, no. 291, fig. 150). In both their differences andsimilarities, these two versions of the same subject cast light on an important piece of the complex puzzle of Ricci and Magnasco’s give and take, helping us to better understand newfacets ofSebastiano’s creative process in these years.The encounter between the two painters–both actual and ideal–was to repeat itself ten years later,when Sebastiano was busy with the decoration of Palazzo Marucelli in Florence. By then, however,the roles they played were more defined, and the established stylistic features and “copying” by bothartists was more playful than formative.Nonetheless some of the subject-matter derived from Magnasco already appears in Sebastiano’swork, and particularly so, in his Milanese years; the first and foremost is that of the ‘Temptations’.The best-known example is surely the large picture that belonged to the Marchese Cesare Pagani andpassed to his descendants, the Temptation of Saint Anthony in the Porro collection. This sizeablecanvas–its landscape painted by Peruzzini–then became the prototype for other equally strongversions, such as those now in the Hermitage, Saint Petersburg and the Gemäldegalerie, Munich, inwhich the focus of the artist’s attention was not so much the setting as the figures of the protagonists.The painting before us shows even closer and more emphatic engagement with the figures. The artistuses a creative lens that “zooms in” on the players in this scene, describing them withrich, substantialbrushstrokes and a vigorous chiaroscuro, thus obtaining a powerful and intense narrative approach.The crude gestures of the female figure and theatrical movement of the two demons are balancedby the hieratic and imperturbable saint, indifferent to threats and blandishments, his gaze fixed onthe sacred scriptures.Robust shadows and muscular bodies were both elements that interested Sebastiano in the yearsbetween the end of sixteenth and beginning of the seventeenth centuries: rich brown tonalities,strong shading, ruddy flesh, and certain anatomical features–especially feet and hands–aresymptomatic of an enduring connection with the late Baroque language of his training, and remindus of the Emilian qualities that were so essential to the definition of his most authentic manner. Someyears later Ricci painted a revised version of this subject, using softer forms and fewer chiaroscuroeffects, in a canvas of slightly smaller dimensions (85 x 120 cm) now in the Pinacoteca Egidio Martiniin Ca’ Rezzonico, Venice. The landscape on the right, nocturnal and gleaming, is created with swift,loosely-applied pigment, laid on the canvas with remarkable immediacy, and with the clear intentionof avoiding emphasis on natural elements, as if thepainter feared that accentuating their value mightdivert attention from the foreground scene and its strong emotional content.