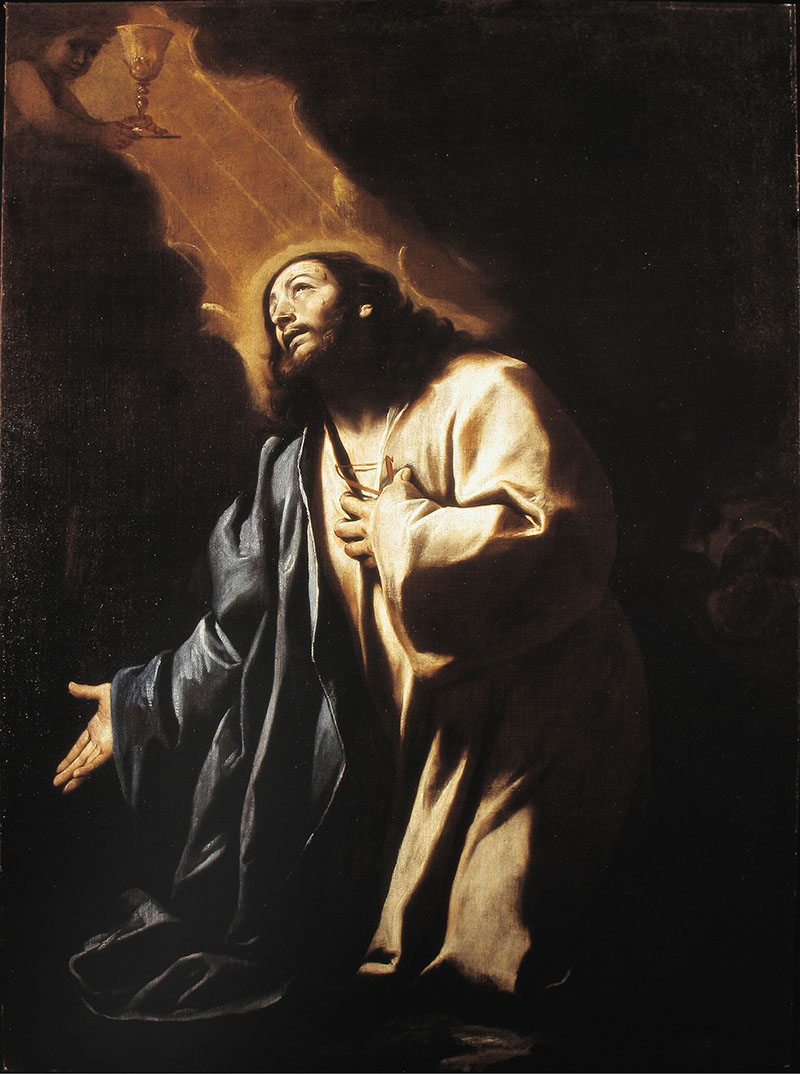 The Agony in the Garden

Description
Jesus is depicted in theGarden of Gethsemane on the Mount of Olives, where he has retired withthree disciples, who can be dimly perceived in the background at right. He kneels, clutching his chest,and addresses God the Father with the intensity of a man at the limits of his experience, praying thatthis moment may pass.The scene of the Agony is described in the Gospels of Saint Matthew (26: 36-46), Saint Mark (14: 32-42), and Saint Luke (22: 39-46), immediately subsequent to the Last Supper and preceding the Arrest(with the Betrayal of Judas). Christ’s inner torment is one of human fear for his fate, but he declareshimself ready to accept the will of the Father. Unlike the accounts given by the Evangelists Matthewand Mark-from which the present scene is taken-Luke’s narrative includes the apparition of anangel: And he was withdrawn from them about a stone’s cast, and kneeled down, and prayed, saying,‘Father, if thou be willing, remove this cup from me: nevertheless not my will, but thine, be done’.And there appeared anangel unto him from heaven, strengthening him. And being in an agony heprayed more earnestly: and his sweat was as it were great drops of blood falling down to the ground.[Luke, 22: 41-44].Strong contrasts of light enhance the sense of drama in one of the most deeply intimate and humanepisodes of the Passion. Christ is wrapped in generously described drapery, with deep folds and apowerful chiaroscuro treatment defined by the luminous beam that bursts through the clouds atupper left; light also strikesthe figure from a secondary source on the left side of the composition.Christ’s sorrowful and intensely expressive face is marked by tears and blood.Doctors Erich Schleier and John T. Spike agree in establishing that the dramatic use of light to isolatea single, monumental figure dates this picture to Mattia Preti’s Maltese period. Spike (Mattia Preti,Florence 1999, pp. 226-227, no. 140) offers a more precise dating of circa 1675, and in his discussionof our work he refers to paintings of the same subject recorded in various early sources, but which“lack the descriptions that would enable us to make an exact identification”.The canvas, with its characteristic Neapolitan weave, closely resembles Preti’s Martyrdom of SaintSebastian and compares generally with works painted between 1676 and 1678 for the Sarria Churchin Floriana, Malta. Moreover, the silvery-blue tonality and earth browns connect with the Floriana canvases, which were created about half way through Preti’s lengthy Maltese sojourn of almost fortyyears (1661–1699).