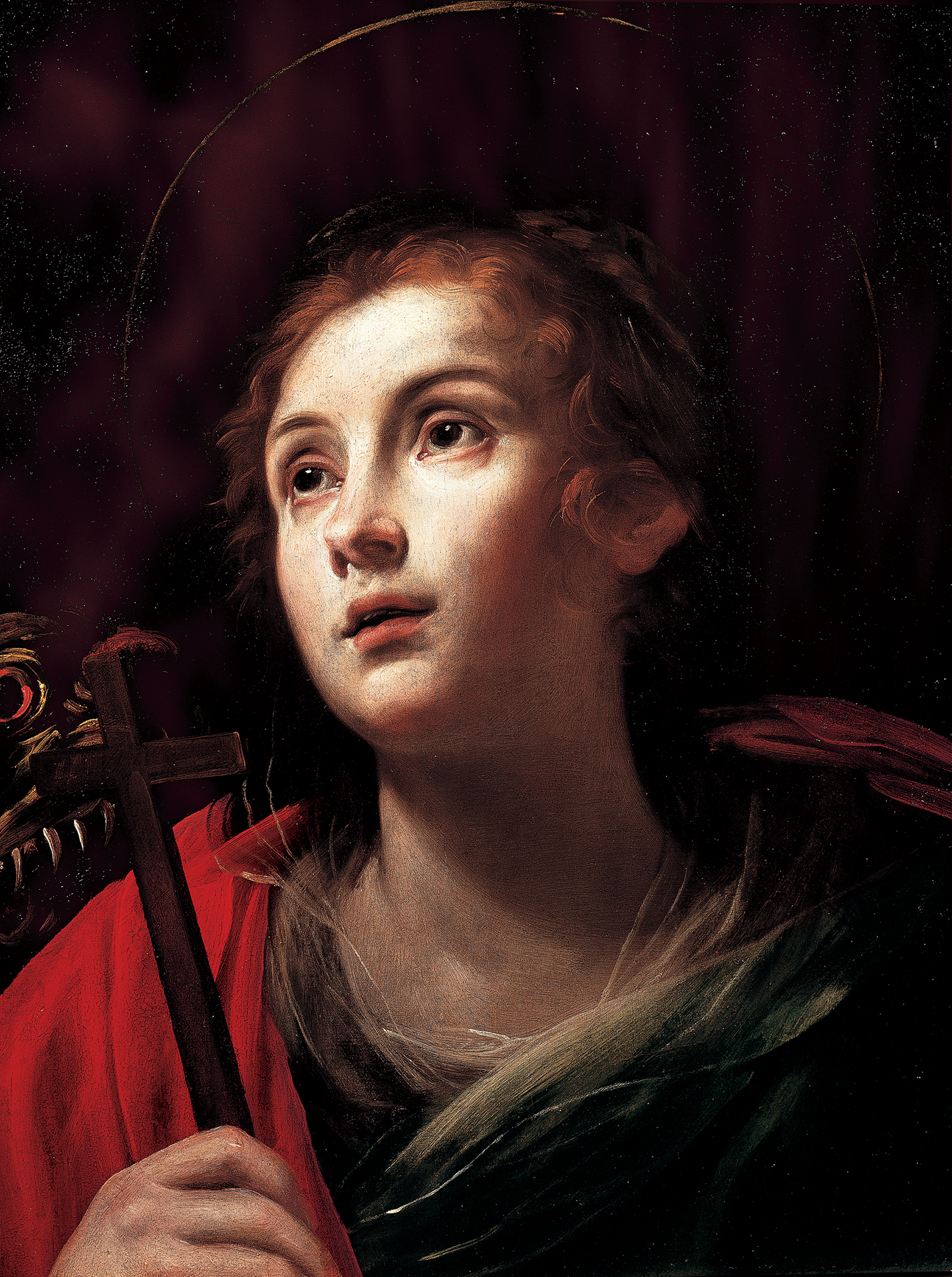 Margaret of Antioch, the beautiful daughter of a pagan priest, but steered towards the Christian faith by her governess, was the object of the Roman Governor Olibrius’ lust. When resisted by the maiden, he had her tortured and imprisoned. Here the devil appeared to her in the form of a fearsome dragon who threatened to devour her, but the saint freed herself with the sign of the cross. Having escaped mortal danger, Margaret was tortured again and finally beheaded by her persecutor.

The youthful aspect and beauty of this figure would exclude the subject of Saint Martha of Bethany (also victorious over a dragon), since she is generally represented as an older woman and almost always holds as her attribute the aspergillum, with which she defeated the monster, spraying him with holy water.

During the nineteenth century the picture was in a Roman collection, yet it appears not to date from the artist’s sojourn in the Eternal City, when at least initially he was a close follower of Caravaggio, but rather from the period immediately after his return to Lombardy (c. 1620-1621), when Vermiglio swiftly adapted himself to the reform of sacred iconography as promoted by Cardinal Federigo Borromeo with the foundation of the Accademia Ambrosiana.
The extreme simplification of the image and the sense of emotional calm are perfectly consistent with the aesthetic canon of Borromeo, who sought the use of clear, didactic images to support his classicist revival, in stark antithesis with the prevailing direction of Milanese early Seicento art, dominated as it was by the compositional and still markedly Mannerist extremism of Cerano, Morazzone and Giulio Cesare Procaccini (see F. Frangi, “Giuseppe Vermiglio tra Caravaggio e Federico Borromeo”, in Studi di storia dell’arte in onore di Mina Gregori, Cinisello Balsamo 1994, pp. 161-169).

It might seem too simplistic to justify the artist’s creative choices solely in the light of Borromeo’s precepts – since one can already see a sort of “return to order” in his late Roman works, which parallel the more moderate followers of Caravaggio such as Orazio Gentileschi – but this still remains the most reasonable way of explaining Vermiglio’s gradual detachment from his own Caravaggesque phase. This detachment may already be perceived in the Saint Margaret, where notwithstanding the artist’s attraction to the depiction of nature, he tempered its harsher qualities and created his own version of the restrained eloquence found among the Bolognese – especially Alessandro Tiarini – and adopted the rigour of the reformed Tuscans such as Cristofano Allori and Passignano. It was from these artists, but also from the youthful works of Daniele Crespi, with whom he was to share a good measure of stylistic choices, that Vermiglio drew his compositional arrangements, clear calibration of volumes and enraptured, adoring faces, which are also present in the painting before us.

We are close in date to the Stories of Saint Innocenzo painted for the Lateran Canons of Tortona and now in the sacristy of the Cathedral there (c. 1621); and – as I have already underlined (A. Crispo, “Un’Assunta di Panfilo e Carlo Francesco Nuvolone e qualche proposta per Giuseppe Vermiglio”, Artes, 8, 2000, pp. 40-50, especially pp. 46-47) – to the Saint Francis in a private collection, published by Alessandro Morandotti (“Note brevi per Cerano animalista, Vermiglio pittore di figura e Carlo Francesco Nuvolone autore di ritratti”, in M. Gregori and M. Rosci, eds., Il Seicento lombardo. Giornata di studi, Turin 1996, pp. 65-84, especially p. 76, fig. 126), and the Redeemer in the Bob Jones University Museum & Gallery in Greenville, also datable to 1620/1625.