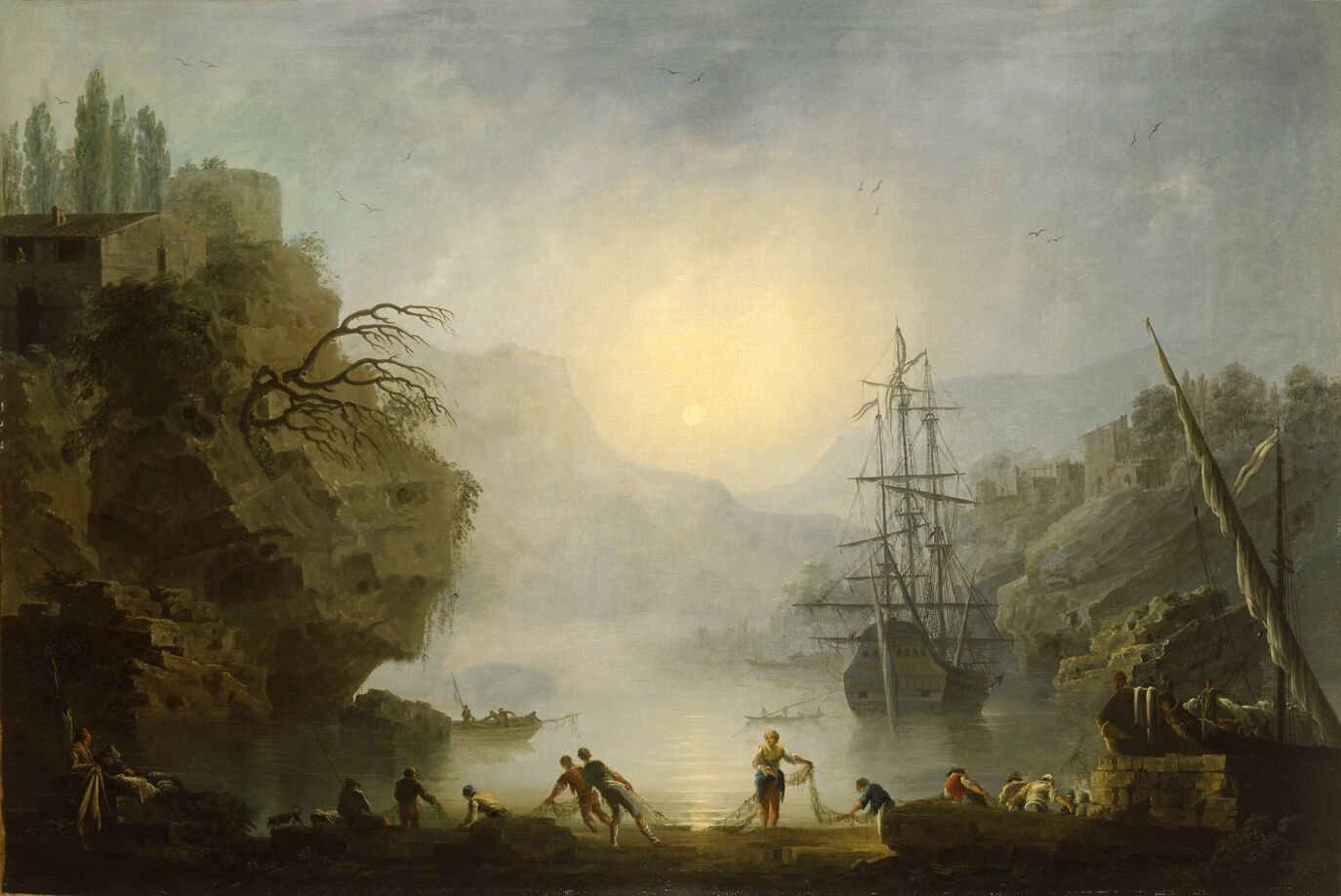 Fishermen in a Mediterranean Port

M. Vinci-Corsini in La Pittura Eloquente, exh. cat., Maison d’Art, Monte-Carlo 2010, n.26, pp. 135-138, illus. p. 137.
This marine view, shrouded in a misty and even mystical atmosphere, combines the Romantic senseof the sublime with explicit references to reality.
The scene is set on the shore of a wide bay, lit by a dawn sunrise over amountainous horizon, withfishermen arranging their nets in the foreground. The wellbalanced composition is structured aroundthe female figure standing in a central position. A ship is moored on the right, and some way behindit, a larger one sits at anchor.
Traces of lettering are visible (possibly part of a signature?) at lower right.
Like Claude Joseph Vernet, Charles François Lacroix (“Lacroix de Marseille”) and Francesco Foschi,Fidanza would habitually frame his landscapes using a broad central viewwith a tree, boat, ormonument, according to a format that appealed to clients and became highly successful.Our painting has parallels in composition and style with the Harbour with Lighthouse in the Museumof Fine Arts, Budapest (inv. 963, initialled), apicture steeped in a similar atmosphere of tranquillityand exuding a suspended, almost spiritual state of being. The Romantic culture that underlies boththese works would suggest a dating during the last two decades of the eighteenth century.
The painting presented here shares two parts of its nineteenth-century provenance with others nowin major museums (including works by Botticelli, Raphael and Carracci in the National Gallery,London). One of the greatest British collectors of the pre-Victorian period was John Rushout, 2ndLord Northwick, resident in Rome and Sicily from 1792 to 1800 and a friend of Canova, Nelson and the Hamiltons. His residence at Thirlestane (sometimes written as Thirlestaine) House was open topublic view, and by the time he diedit comprised over 1,500 paintings, displayed in multiple galleries.
When our picture was sold in 1859 it was described as “A River Scene, with fishermen hauling theirnets; beautiful effect of sunrise. A capital example of the master.”–notwithstanding the fact that itwas believed to be by Vernet; and it was sold together with another “River Scene”, listed as“companion to the preceding”. The history of the pendant painting is unknown.Our canvas was then among a number of works purchased at the Northwick sale–including ClaudeLorrain’s Roman Campagna of c. 1639, now in the Metropolitan Museum of Art, New York–by asecond very active collector, J. S. W. Sawbridge-Erle-Drax, a British Member of Parliament.